Sincerely Ethiopia has just been nominated for the Best Documentary in The Africa Movie Academy Awards 2014 (AMAA).

Sincerely Ethiopia is a documentary that tells the stories rarely told in mainstream media, it aims to highlight positive impact driven individuals and projects to a wider audience. It showcases the lives of ordinary people in Ethiopia who are addressing these challenges. HIV/Aids, homelessness, illiteracy, social issues and disabilities are some of the topics addressed in this film.

They are up against four other documentarys from Mali, Nigeria and South Africa.

AMAA is a platform that projects the African film industry to Africa and the rest of the world. The AMAA 2014 nominations 27 categories of the awards were announced by the AMAA Jurors at a well-attended gala night which took place at the Emperor Palace Hotel, Johannesburg, South Africa. The main award where winners will be announced on 24th of May, 2014 in Bayelsa State, Nigeria.

Discover which films from Africa made into the list of 27 film Categories here. 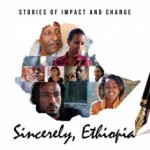